Respiratory syncytial (sin-SISH-uhl) virus, or RSV, is a common respiratory virus that usually causes mild, cold-like symptoms. RSV is on the rise in the Commonwealth, the Northeast and much of the United States. Public Health officials, including the Massachusetts Department of Public Health and the American Academy of Pediatrics, are urging parents and families to take steps to prevent illness and stay healthy.

Most people recover from RSV in a week or two, but the virus can be serious, especially for infants and older adults. RSV is the most common cause of bronchiolitis (inflammation of the small airways in the lung) and pneumonia (infection of the lungs) in children younger than 1 year of age in the United States. 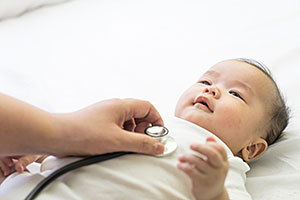 People infected with RSV usually show symptoms within 4 to 6 days after getting infected. Symptoms of RSV infection usually include

These symptoms usually appear in stages and not all at once. In very young infants with RSV, the only symptoms may be irritability, decreased activity, and breathing difficulties

Call your healthcare professional if you or your child is having difficulty breathing, not drinking enough fluids, or experiencing worsening symptoms.

Healthy adults and infants infected with RSV do not usually need to be hospitalized. But some people with RSV infection, especially older adults and infants younger than 6 months of age, may need to be hospitalized if they are having trouble breathing or are dehydrated. In the most severe cases, a person may require additional oxygen or intubation (have a breathing tube inserted through the mouth and down to the airway) with mechanical ventilation (a machine to help a person breathe). In most of these cases, hospitalization only lasts a few days.

VISIT THE CDC WEBSITE FOR MORE INFORMATION ON TRANSMISSION, CARE AND RISK