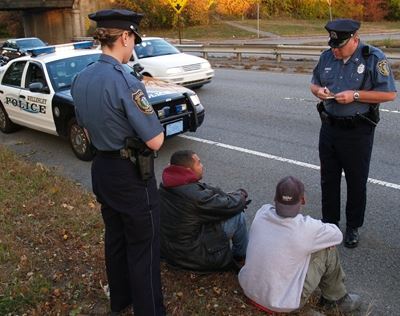 Their tasks and responsibilities include:

From March until December 2008, the Warrant Team processed 90 outstanding arrest warrants. Of these warrants 25 were resolved on their own without intervention from the team. The remaining 65 warrants were all actively worked by members of the team. 38 warrants were cleared as a result of direct or indirect contact with the offender and 13 high priority warrants were cleared by arresting the offender. Some offenders still remain at large, with officers actively attempting to locate their present whereabouts.

What is an Arrest Warrant

Arrest warrants are issued for those defendants that do not appear when they are required to for court, or when it is believed that a defendant being charged will not voluntarily appear in court. Arrest warrants are issued by a court, and allow a Wellesley Police Officer to serve the warrant anywhere in the Commonwealth of Massachusetts. The warrant also allows a police officer to hold the defendant until the next time court is in session, often without bail or the chance to be bailed.